Deliberate Creation: You Get
What You Focus On!

Closely related to the Law of Allowing within the Law of Attraction, the Law of Deliberate Creation basically means that you experience whatever you think about, whether you want it or not.

If you're thinking about it, spending your time, energy, attention, or words on that subject, THAT is what you are creating MORE of in your life!

It doesn't matter what the tone of the thoughts are, if you hate that thing, are angry about it, don't want it, or really want the opposite of whatever it is -- the subject of your thoughts is what is doing the attraction.  And, it's fueled by the energy of your emotions, so if you're really angry about it, you are attracting it even faster!

Law of Attraction 'Hears' the Subject Only

It's like multiplying "negative numbers" -- just as surely as -2 x -2 = +4 you are attracting all the "2's" that you are thinking about, whether they are negative or not! 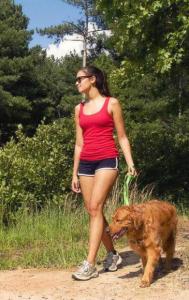 Another way to think about the Law of Deliberate Creation is as if you were trying to give commands to a trained dog, or a horse.

You cannot tell a dog to "not sit" and expect him to know what that means, or to know what to do instead.  The more likely outcome is that the dog will sit, because he heard "sit" and it doesn't matter that the word "don't" or "not" or "no" was in front of it.

Or, if you were riding a horse, and told it to "not trot" or "don't whoa" or "I don't want to stay" -- the familiar words, trot, whoa, and stay, is what would register in the mind, if anything, and that is probably what would happen (even though it was the opposite of what you wanted!)

The Law of Attraction and the Law of Deliberate Creation work the same way; they respond to the general idea of what you are focusing on, not your feelings ABOUT it.

Here is a VERY OLD video of an audio track between Jerry Hicks and Abraham (speaking through Esther Hicks, back in the days when she was purposefully changing the sound of her voice when it was Abraham speaking, which is why she sounds so odd in these old tapes) discussing Deliberate Creation:

Note: Some mobile devices may not display this video. If that is the case for you, you can view it here:  Abraham-Hicks video on Deliberate Creation  (will open in a new window.)

Although Deliberate Creation is not really discussed using those exact terms so much anymore (by Abraham Hicks at least) in this video, Abraham talks about what they mean by the term.

They use the term with the assumption that people DO want to do their creating on purpose.  But, Abraham also says it really should be called just the "Law of Creation" because it works the same way whether you are thinking of what you DO want, or of what you do not want.

The direction of your thought is your choice.

The Law of Attraction and the Law of Creation simply act upon whatever you are thinking about, and start to magnify more of that same kind of energy and experience to you.

There are two parts:

When this recording was made in the late 1980's, the idea of creating through thought alone was quite new to most people.  People were very used to creating though action alone, and making things happen, through their own sheer will and deeds.

The idea that their thoughts were playing an important role, perhaps a role that was even more important than their actions was kind of scary, because it was new.  (And, because we ALL think some truly awful thoughts sometimes, it's human nature to do that, so the idea that those thoughts might manifest themselves can be terrifying!)

Then, Is Action Necessary At All?

Action IS an integral part of the world we live in.  It's just that utilizing the power of our minds, through the Law of Attraction and the Law of Deliberate Creation, we can make the whole process of creating SO much easier!

Abraham refers to pre-paving, setting intentions, and clarifying thoughts of what you DO want to be experiencing in advance of what you want to receive, or experience, that not as much action will be necessary to get what you want.

The key is to be intentional and take action in JOY, rather than just because you have to, are forced to, because there is no other option, or to compensate for poor choices (in thought or deed) made previously.

Before any of us were born into this physical human life experience, we all intended to do the most of our creation with our minds and thoughts, and then to enjoy the action of experiencing those creations.  We humans have had it backward for quite some time now, so the goal of this website is to provide explanations and Law of Attraction tips to make the enjoyment part easier!

Try thinking your desires into being first!

...Then, you will be guided and inspired, through the Law of Attraction, to more ideas, more fun, more interest, and led to easy steps for the perfect action to take to move you closer and closer to your desire in a quicker amount of time than ever before!

If you have questions about the Law of Deliberate Creation, ask them at the Law of Attraction Q & A Center, and I will post them here as I fast as I can answer them!